Music on the Point Wows! 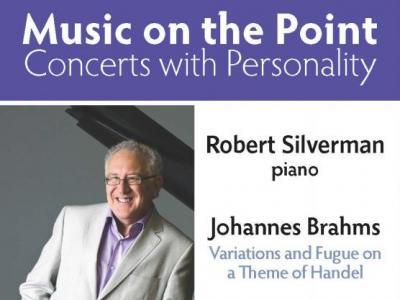 Friday, January 17th marked our third Music on the Point community concert and featured a performance from renowned pianist Robert Silverman, former UBC School of Music Faculty member, and a member of the Order of Canada.

For those of you who missed out, check out this blog post from our fabulous UTown@UBC Student Ambassador Alba Zhou!

Last Friday, I had the great pleasure of seeing Robert Silverman for the Music on the Point series in Roy Barnett Hall. Robert Silverman has a fantastic wealth of experience and knowledge and, adding to his list of impressive accomplishments, even being appointed as a Member of the Order of Canada in 2013. I was honoured to be able to see him perform live, and especially thrilled to hear his comments on the piece. Silverman began the night by giving some history and background to the piece at hand. This was such a great (and educational!) experience, making the whole piece seem so much more personal and captivating. With great anticipation, he played Johannes Brahm's Variations and a Fugue on a Theme of Handel, Op. 24.

Johannes Brahms wrote and dedicated this piece to his dear friend Clara Schumann in 1861, the widow of his musical and personal mentor, Robert Schumann. The Handel Variations consist of 25 variations on a theme and is brought to a fantastic close with a longer fugue. The theme itself comes from an aria in George Frederic Handel's Harpsichord Suite No. 1 in B-flat Major. The culmination of the themes shows some of the best of Brahms, including his personal imaginative flair for exciting and new roles for the bass unlike the traditional style of varying only the melody in a piece.

On a large scale, I absolutely love that this musical form reminds me of humanity (did I mention that I'm an Arts student?). We all share the common factor of being human, but it manifests itself in so many beautifully diverse ways. People come in all shapes and sizes, from quirky and high energy to serious and melancholy. The complexity of this musical form is so reflective of this and hearing it live adds fantastic dimension.

Personally, I have a few years of classical music training for piano, and I fell in love with the musical form of theme and variations at a young age. As a kid, I had quite a short attention span, so learning to play the variations on a theme was always perfect! I could have one central focus but play around with multiple shorter variations – it was a win-win situation! It soon turned into a fun game for me to see if I could pick out the theme from variation to variation, and it's a challenge I definitely still enjoy today.

Robert Silverman definitely impressed the audience, and I would absolutely love to hear him play again! If you ever get the chance, I'm sure that anybody in the audience would highly recommend an evening listening to Robert Silverman and the Handel Variations.